Here are the some of the most memorable  Teacher's Day Stories from students around the world. A bunch of noisy kids were making a ruckus while sitting behind me in the class. My class teacher got angry and he thought I was the one who did it. He sent me out of the class. I tried explaining, but he didn’t listen. While I was standing outside, someone told him it wasn’t me. He called me back in, but I refused to move as I felt insulted. He brought me in the class anyway and apologised in front of the whole class. That day I learned the biggest lesson of my life, “you are never too big to accept your mistake.” Once my uncle came to pick me up from school during half day. My teacher asked me why did I have to leave early and I made a sad face and said, “I am not well madam.” She had the slip that her uncle got issued from the office. She that and slapped me. It had the real reason written on it which said, ‘family function.’ I learned my biggest ever lesson from my class teacher who taught me to live life on my own terms with the simplest message that she could give. The day I learned to be comfortable in my skin, there was no stopping me. Once during a school function in the auditorium, the chief guest asked us the name of the US President’s wife. Since the students did not know, one of the teachers sitting in the corner whispered the answer to someone. I heard it and replied loudly. I was called in front of everyone. He praised me and asked me how did I know it. And I pointed towards my teacher sitting in the corner. She was so embarrassed. I liked to sing, but I would not call it my passion. My hobby, probably. But my teacher changed my perception of who I was. He would make me sing randomly in the assembly or in the class. He asked me to focus on my solo performances and gave me the confidence to sing on the stage. Once he pushed me on the stage, there was no stopping me. And it’s because of him that I went on to win the first prize in a National Level competition. Once during our exams, a teacher was walking through the corridors invigilating the classrooms. Suddenly a monkey jumped at her out of nowhere and she started screaming. She ran inside our classroom, and frantically closed the door. She was scared and the rest of the teachers were laughing on her. We, on the other hand, used the distraction to cheat. I did pass that exam. I was made to sweep the corridors and I felt pretty bad about it. Then I was called to my principle’s office and I thought, I am so dead now. But my principal gave me the sixth Harry Potter book as he knew I was a big fan. The 6th Harry Potter book had recently released and only four books were ordered for the school library. Yet somehow he gave me one. I was elated! I was a heartbroken teenager under the claws of first love. I became a gunda and did not study. I must be in the 9th standard back then. My principal called me and I was expecting a heavy punishment. Surprisingly, I did not get any punishment. Instead he told me that unless I become something of my own, no girl’s family will ever let her be with you. It was a simple advice, but it came from someone I expected the least. It’s been 6 years, I am still dating that girl. My parents pressurized me to take Science stream even though I wanted to study commerce. Chemistry was my weakest point. I could not remember the names of the chemicals, leave alone the periodic table. And then after a couple of class tests with zero marks, my teacher called me to her cabin and handed me a poem made on the names of chemicals in the periodic table. I still remember them. 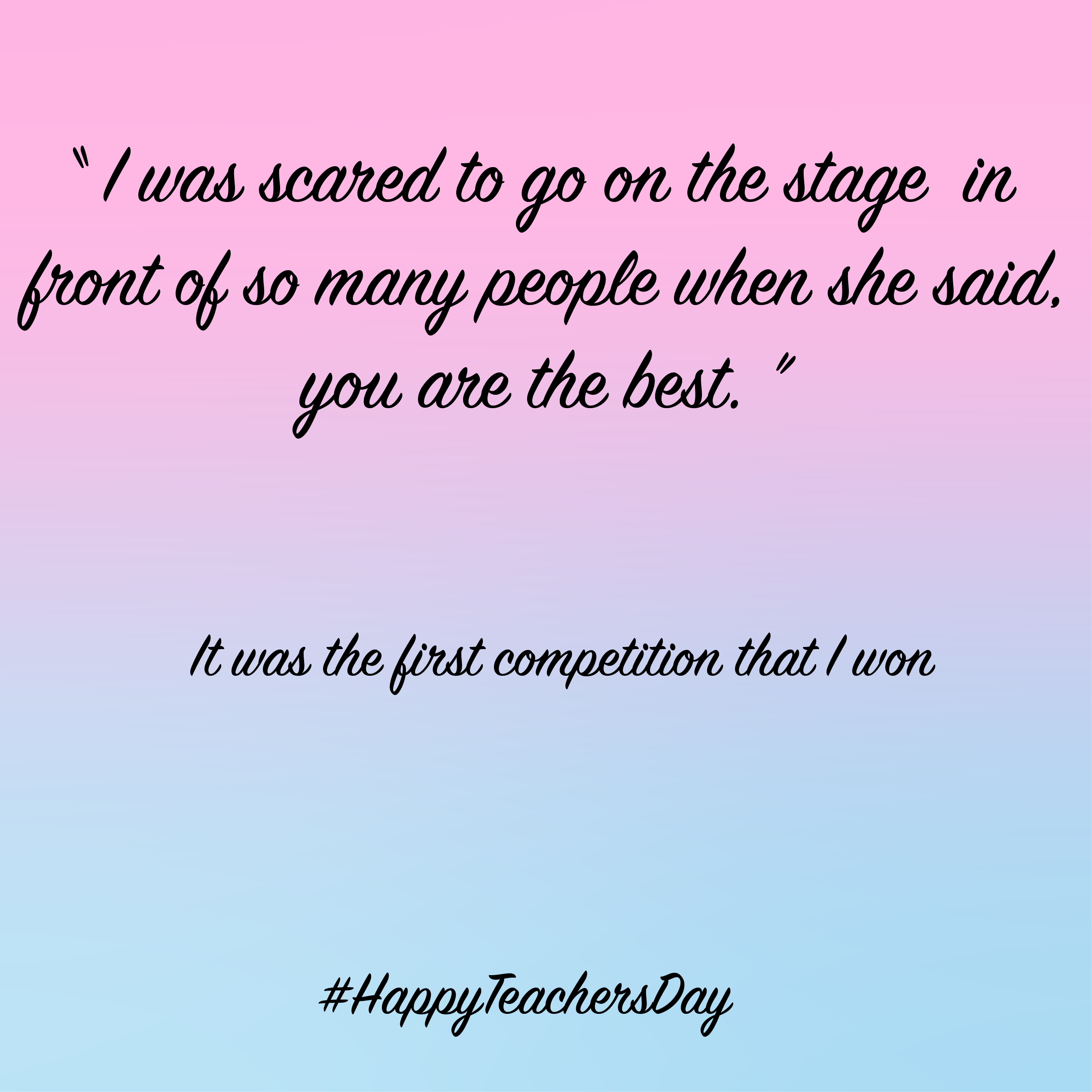 I was a small town girl participating in the dance competition at the state level. Seeing so many smart kids, I was scared to even go up on the stage. My teacher who was accompanying me patted my back, looked me in the eye and said, “You are the best.” Her voice gave me such encouragement, I went up there and killed it.